The famed Santa Ynez Valley Grange Hall in downtown Los Olivos will feature a special, pre-Christmas Americana/Bluegrass concert by Peter Feldmann and the Very Lonesome Boys Trio. The show, starting at 8:00 PM on December 12th, will include some songs from the repertoire of songster and banjo player Uncle Dave Macon, as featured on Peter's CD project Grey Cat on The Tennessee Farm.

Peter, a long-time teacher, promoter, and performer, and nationally-known musician in old time and bluegrass circles, will be joined by David West, a consumate banjo and guitar picker extraordinaire, and Tom Lee, a multi-styled bassist and founder of the Song Tree Concert series. The three will feature hot instrumentals, lonesome songs, murder ballads and songs of the West on banjos, guitars, mandolins, and string bass. 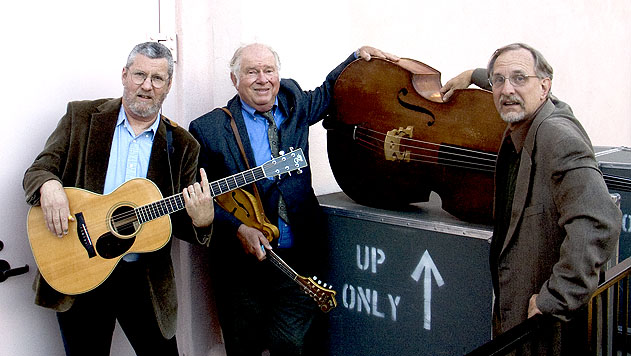 The Very Lonesome Trio's distinctive sound is firmly grounded by the solid bass lines of Tom Lee. Tom's music ranges far and wide, from traditional jazz to country, Hawiian, and bluegrass standards. As a skilled bassist, Tom has toured with the Drifters, the Bluegrass Cardinals, and many other musical groups. His vocal harmonies add richness to the group's duo and trio arrangements.

David West has produced over sixty albums as a staff producer for CMH Records in Los Angeles, and many more as a freelance producer through his  Studio "Z" and Play Ball! Musical Services in Santa Barbara, California. A multi-instrumentalist, his playing has appeared on hundreds of albums, TV shows and commercials, plus many film sound tracks.  His early career was spent on the road with the Cache Valley Drifters (as a founding member) and as an accompanist to songwriter Kate Wolf.  The last fifteen years have been devoted primarily to being a studio musician.  He still occasionally tours, backing up some of his favorite musicians, including Peter Lewis (Moby Grape), Chris Hillman (Byrds), California musician/musicologist Peter Feldmann and Nashville/California songwriter Kate Wallace